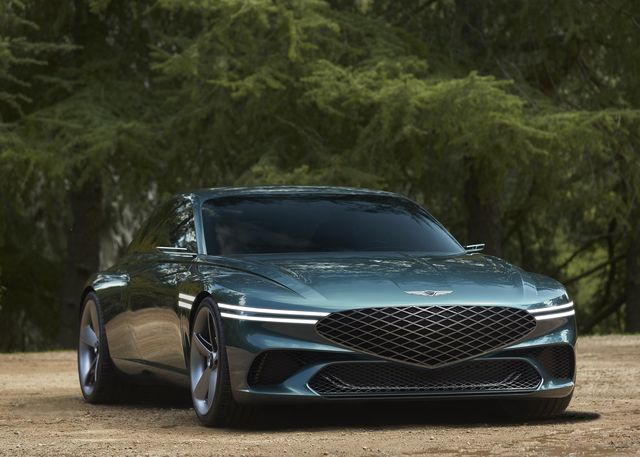 Finally, revelation has been done about the Genesis X concept. The purpose is to showcase a model which is sustainable, sophisticated, opulent, and has a robust powertrain.

This is the fifth concept revealed by the Korean company. Earlier concepts were about New York, GV80, Essentia, and Mint. X is a fully electric car concept. But there has been no revelation made by Genesis about the performance details. The company insists that the car will offer “high performance GT.”

Genesis is trying to improve upon its Two Line philosophy, and this fact is evident from the taillights, headlights, etc. At the front, there is a large grille. But Genesis claims that the grille and the air intake beneath improves the airflow enhances the range of the car, and reduces any sort of resistance.

The alloy wheels have five spokes and flaunt turbine-type design. The lime green brake calipers indicate the car’s performance. As per the claims of Genesis, the rear looks similar to a horseshoe. It makes the profile of the concept sleek and modish.

In the released images, we can see the exterior video cameras replacing the customary wing mirrors. Genesis has made great efforts to ensure that the interior of the car feels “driver-oriented.” A dashboard, as well as the central console, surrounds the driver. The four-point seat belts and bucket seats make the driver feels secure while driving. A crystal lever will be used for switching between driving modes. The digital display has air conditioning and an infotainment system.

The best part is that the cabin has been designed with the help of upcycled materials. For instance, leftover leather pieces have been used for designing the weave-patterned fabric on seatbelts, airbags, and steering wheel.