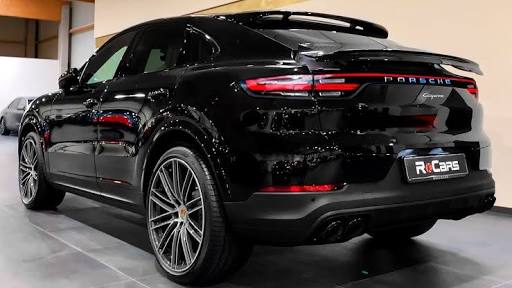 Porsche, one of the most luxury automobile company has launched an all-new model: Cayenne Coupe SUV in the home country. The car will be coming to India via a CBU route.

Porsche is known to load its car with luxury design and features. In terms of the design front, the model comes up with similar steps as the standard Cayenne which comes with a Porsche-signature, ‘4-dot LED DRL’s which will be seen shared with the two. At the rear front, the car gets tail-lamps which will be seen extending across the boot lid, which is seen bearing the Porsche lettering.

It is loaded with various features, some of the unique ones are as follows:

1. The model comes up with a raked roofline & varied 20-inch wheels of alloy. The length of the roofline will be 43mm shorter in height. The coupe will be around 18mm, which is a little wider than the standard model of Cayenne.

2. To maintain a proper head-room for the passengers, Porsche has planned to lower the rear seats. The coupe will come up with lesser space for boot and goes down from 745 litres to 598 litres.

The model has a similar interior design with Panamera and standard Cayenne. In terms of interior designing, the car is loaded with luxurious interiors, such as:

1. The model will have a 12.3- inch touchscreen which will be placed at the centre of the dash.

2. The air conditioner will have feather-touch buttons.

4. The model will also come with the standard three-spoke Porsche steering wheel.

6. The entire interiors of the car will be a black theme

The base model of Porsche is powered by a 3.0 Litre petrol turbocharged V6 Engine which gives torque of 340hp & 450Nm. One the other hand the turbo trim gets a twin-turbo 4.0 litre v8 which gives torque of 550hp & 770Nm. Both the options will be supplied with an 8-speed torque automatic gearbox converter.