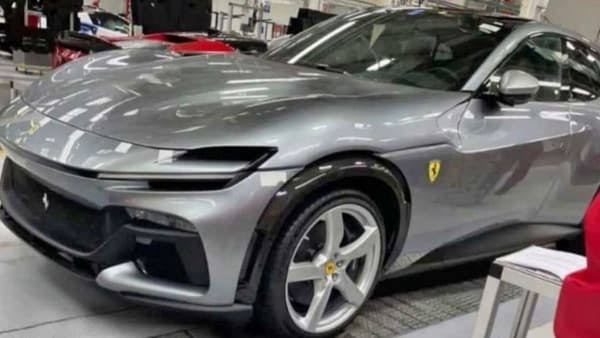 It is raining SUVs not only in India but even all over the world. Recently we have seen the rise of the SUVs in the luxury car companies like Jaguar, Mercedes Benz, BMW, etc. Now it is time to see the first ever SUV by the Italian Ferrari. The luxury racing carmaker is all set to launch its first SUV, the Purosangue, by the end of 2022.

The Supercar manufacturer has set out into the SUV world and is building a competitive SUV against the likes of Lamborghini Urus, Aston Martin DBX and Rolls Royce Cullinan. The full set of specifications are yet to be revealed by the company, but we have enough experience with Ferrari to know what to expect from it. Here are some details about the new SUV that has begun production in the Ferrari plants.

It is a known fact that the Ferrari cars are named after the horses and riding terms. Keeping up with the traditions, the Italian carmaker has named the SUV as Purosangue meaning Pure Bred or thoroughbred. The terms is used to denote the pure and rugged nature of the SUV. It will be a powerful machine that will not compromise on any of the Ferrari’s qualities.

Engine and Transmission of Purosangue

In a recent interview, Ferrari CEO Benedetto Vigna has confirmed that the new SUV will be powered by Ferrari’s V12 engine. The V12, as we know is a high-performance system and it is quite a heavy option too. As of now, the only SUV to sport a V12 engine is the Cullinan from Rolls Royce. The other competitors like the Urus, DBX and Bentyaga are powered by a V8. The V12 could make the Purosangue a much powerful car than its competitors.

It is also reported that the V12 will be naturally aspirated and would not accommodate a hybrid assistance system. This could come as a disappointment for the fans who seek electric transition from Ferrari. But you must know by now that adding an electric power train to the already bulky V12 will make the SUV heavier and could compensate the performance.

As for transmission, we can expect a transaxle dual-clutch automatic gearbox to be coupled with the V12. This could provide for a seamless control over the high-powered SUV. All in all, Purosangue would be a thoroughbred powerful SUV.

Interior and Exterior of Ferrari Purosangue

The Purosangue has been maintained under heavy wraps by the automaker. But the test mules give away at least some of its great looks. The new SUV is more than a crossover like the Urus or the Cullinan, it has gained a new look for itself. Also, we can wait for an all-aluminium chassis with it.

As for the interiors Ferrari will go all-out on this on with a new steering wheel design, new infotainment system, an improved head-up display, new instruments, new ways of operating the cabin controls, rear-seat entertainment, and improved ingress and egress. Housing them all in a large volume of leather and carbon fibre will add the Ferrari touch on the inside. After all who said that power and pleasure can’t go together? In fact that is the only way ahead to go.

Dimensions and Seating of Purosangue 2022

The Purosangue will easily reach up to 5 meters in length and will need a lot of space on the road. Given the fact that the SUV will need a higher ground clearance than its sporty brothers, it will have a height adjustable suspension to solve the issue. The 2-door SUV is a 4-seater and it will comfortably seat up to 4 people, but if you have two thin friends, you can seat up to 5!

We are yet to know the price of the Purosangue, but as with all Ferrari’s, we can expect it to come with a hefty price tag. If you are planning to buy the car in India, on top of the hefty price tag, you will also have other things such as the import fee, import duty, etc. All in all, if you are planning to buy the Ferrari Purosangue, the total cost could go above 3 Crores. So, for all you Ferrari lovers out there, get ready to see your favourite red car as an SUV.