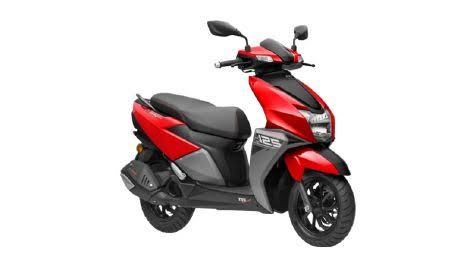 TVS NTorq has made an enormous impact on the market of India with its performance. Talking about the BS6 TVS NTorq 125, we have finally found out the pieces of information about its engine and other details. All three variants of the scooter have made it to the BS6, and the official bookings are soon to be commenced. The updated model of the vehicle comes with the 124.8cc, 3-valve, air-cooled engine, which is benefited from the technology of fuel injection. The company has claimed that the scooter is capable enough to deliver the maximum power of 9.25 bhp and the peak torque of 10.5 nm at 7,000. It also proved 10.5 nm peak torque at 5,500 rpm.

If we compare new TVS Ntorq 125 to its existing version, it is quite less powerful. The existing version of the scooter was only good enough for the power of 9.1 bhp at 7,500 rpm. Talking about the capacity of its fuel tank, it is pretty great, and it is enlarged by 0.8 litres as compared to the BS4 version. It has a total capacity of 5.8 litres for the fuel tank. It is also 1.9 kg heavier than the old school model. The overall weight of the new TVS Ntorq 125 is 118 kg. You will not be able to see any significant dimensional changes in the scooter.

Now talking about its features, it will be offered in the disc brake and drum brakes. You will also be able to witness the LED headlamp in its race edition, which is priced at Rs. 72,455. Older version of the scooter is priced at Rs. 65,975 while the latter will cost around Rs. 69,975. The official bookings of the TVS Ntorq 125 will be commenced very soon in the coming weeks.