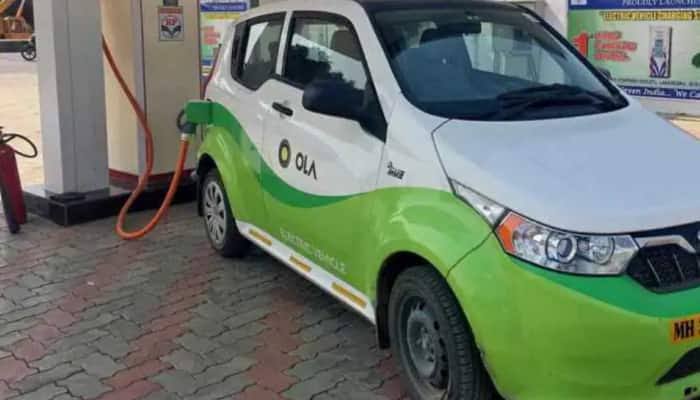 Cab and ride hailing giant of India, Ola has ventured into the electric scooters segment last year. Although there is a lot of negative press associated with the brand, the company has already sold more than 30,000 bikes in the year 2022. It is well on the way to become a market leader in the segment. Now Ola has teased the market with the front view of three models currently under design.

While the teasers doesn’t reveal much, we can safely assume that all three are models of sedan. Since the company has teased 3 designs, we can assume that there will be one compact hatchback that can cater to the entry level market and a full-fledged sedan and there might even be a small SUV hidden in the details. Ola, albeit its recent troubles is a technology driven company and will not miss out the change in the automobile industry of the country.

India has officially become obsessed with SUVs and Ola will try to get the maximum out of this. Ola Electric will look to cater to all the segments of the market to maximise the market share. Incidentally, Ola Electric had already become a market leader that takes on the might of the Hero Electric scooters.

We can make a little guess about how the cars might look like from the micro look we got from the teaser. Here’s what we think about them.

The three new cars seem to sport a sleek, modernistic look. This is similar to the Ola S1 and S1 Pro electric scooters, which sported a minimalistic design on them. All three models that have been teased are in bright red and the sleek designs

The first EV had a low bonnet in the front, with the headlights placed on a wraparound effect. On the rear, it got a more a stubby boot like the Kia EV6 with full-length tail-lights.

The second EV also has wraparound front lights, but it also features twin-unit headlamps, while the front bumpers are aggressively styled.

The Third EV, possibly a sedan, had an extended rear for the boot and a swooping roofline. The tail-lamp design is much different in this model, while the front lights were placed in a single bar.

Ola has confirmed that the base model EV will feature a heavy battery pack, possibly a 70-80kWh capacity one. This is to make sure the brand speaks out for range with their electric cars. It is unclear whether Ola would use the same battery for the other two EVs as well. Looking at the designs, it seems to have a low bonnet height. Coupled with a very low drag coefficient, the large battery pack could very well power the Ola electric cars for a range of at least 450-500 km per charge.

The large battery pack combined with a sleek sedan contours mean that the final EV on the line up could end up as a luxury segment from the company. All car makers are now aiming for a 400+ range for the electric vehicles and Ola will stay with the times when it finally launches the models next year or by 2024.

Competition and On-Road Price of Ola Electric Cars in India

While it is too early to put a number on the Ola electric car price, we can expect the price of the EV to reach as much as ₹25 lakhs. As of now, the affordable hatchbacks are made by Tata and Hyundai. Market leader Maruti Suzuki is yet to venture into the field but looking at the trends of Ola trumping Hero Electric in India, it is high time that the Indo-Japanese company should enter the electric cars manufacturing. Otherwise, it could be too little and too late for the company.

Other competitors for the electric SUVs include MG, Tata, and Hyundai. Luxury brands like Audi, BMW, and Jaguar also make electric SUVs for the country but competing with them would not be the primary goal of Ola. It will stay in the intermediate market and squeeze a little out of both the entry level segment and luxury market.

Ola will also venture into the self-drive cars and experiment the same. Since, the company also has the cab hailing arm, it can act as a constant source of demand for the electric cars arm. It can provide the cars to the drivers of the company at a different price and increase the sales of the company. Either way, it is a win-win situation for the company. Who knows, Ola Electric could very well become the Tesla of India or perhaps become the company that revolutionises the modern commute in India.

Sources have said that the production of the EV’s are to begin by the end of 2023. We can expect more details about the EVs in the meantime. Ola would have learnt from the supply chain issues it had already faced in the launch of the electric scooters and could plan everything beforehand this time around.

So, what do you think about the teasers of Ola electric cars? Let us know of your thoughts.