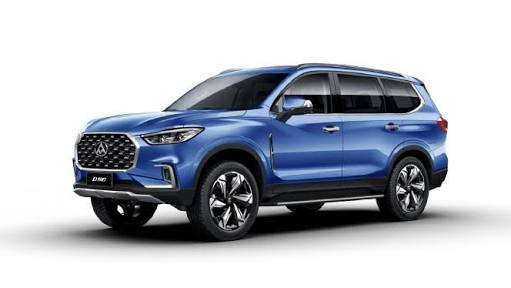 After the successful launch of MG ZS pure electric SUV and MG Hector, the company is all set to reveal its new cat on February 5. MG Motors India has released a teaser on Twitter presenting an image that is confirming it is going to debut Maxus D90 SUV in India. Maxus D90 SUV is already on the sale for the Chinese and Australian markets and soon to be launched in India.

MG D90 SUV is the third all-new SUV in our country in India. MG Motor has recently released a teaser, which includes Maxus D90 based SUV with a tagline that is “Internet Electric, What’s next?” The car is expected to be a rival for Toyota Fortuner, Skoda Kodiaq, and Ford Endeavour. MG Maxus D90 SUV is more prominent in proportions as compared to Its completion, which Endeavour, Fortuner, and Kodiaq. It measures 1875mm in height 5005mm in length and 1932mm in width. We can expect that the car will go on a sale in mid of the year in India, July or August. The vehicle comes with a wheelbase of  2,950mm.

MG Maxus D90 SUV will offer the power of 218bhp, a 2.0-liter turbo-diesel engine, and 480 nm of peak torque. The SUV comes with an attractive look and appears to be very well designed in terms of modern design. The SUV features a bulky stance featuring a bigger grille, side profile which gives a sportier look, wide windows, and diamond-cut alloy wheels. The vehicle will come with two available options, six-speed manual, and an automatic gearbox.

The price of the car is not confirmed yet however, some reports suggest that MG Maxux D90 will b offered in the price range of around Rs 35 lakh, which was quite expected.