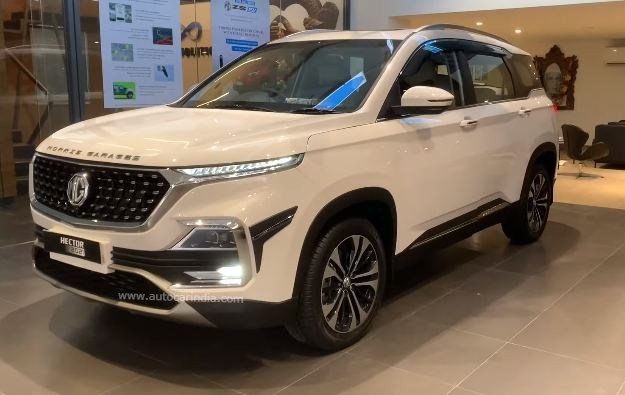 Honda and MG, the Japanese and Anglo-Chinese automakers are both coming up with the facelifted / upgraded version of their already popular SUVs in the international markets. Honda has recently unveiled its new sixth generation CR-V, while MG on its part, has introduced the new Hector and Hector EX Plus.

Interestingly both these SUVs are direct competitors. Unlike compact & mid-sized SUVs, both CR-V & MG Hector EX are full sized SUVs with a spacious interior and powerful engine. MG Hector EX Plus is a 7 seater SUV that packs a punch without compromising on the drive comfort and quality. Other players like Mahindra XUV 500, XUV700, Mahindra Scorpio N, Tata Harrier, and Tata Safari are direct competitors of the vehicles. Other competitors like Volkswagen Tiguan, Hyundai Tucson.

Although both Honda & MG have come up with the new versions, there is on fundamental difference between these two launches. The changes in Honda CR-V has made it more premium & costly while the changes in features of MG Hector EX & Hector EX Plus has made them more affordable.

Let’s go through the list of features each of them comes with and decide which on you can go for.

The new CR-V is a completely redesigned vehicle and it gets a lot of facelifted features on the outside. It is 69mm longer at 4703 mm length, and 10mm wider than the fifth-generation model with a new width of 1866 mm. Interestingly the wheelbase has also increased by 10mm and now stands at 2701mm. In the front, the SUV features a large, upright grille flanked by wide headlamps. They are connected by a prominent chrome strip with a long bonnet below them. The sides of the SUV are stylish too, with rounded wheel arches with black cladding, giving it a sporty look. In the rear, the new CR-V gets L-shaped taillights which are much slimmer than the earlier models.

Dimensions & Exterior of the New MG Hector EX Plus 2022

The Hector EX and EX Plus on the other hand, are characterised by minimalist design changes. While Honda CR-V has got bigger in size, MG retains the same dimensions of 4655 mm length, 1835 mm width & a good 1760mm height of the older version. The larger, 7 seater MG Hector EX Plus will also come with the same dimensions of 4720mm length, 1835mm wide & 1760 high. The list of features however, have seen some changes. The new variants will have halogen projector headlamps, LED DRLs, front and rear skid plates, chrome grille, steel wheels with wheel caps, turn indicators with ORVMs, roof rails, rear spoiler and a micro-type shark fin antenna.

The base variants in Hector will be missing out some features though. On the outside, they will not have the floating light turn indicators and front and rear fog lamps.

Engine and Transmission of Honda CR-V

The new CR-V gets updated versions of Honda’s 1.5-litre turbo-petrol and the 2.0-litre hybrid engines. Honda has reported that the 1.5-litre engine will be fitted to the lower variants and the 2.0-litre engine will power the higher variants of the SUV. However, both the engine options will be available with the AWD option, making all of them capable of off-road driving. As for the hybrid powertrain, it can be had with the Sport and Sport Touring variants. It is also said that the SUV will be enabled with Honda’s e-CVT system, making transmission much smoother in the new SUV.

MG’s Hector and Hector EX plus, on the other hand, will get the 1.5-litre turbocharged petrol motor. MG has reported that all the variants in both the model will be powered by the same engine and the transmission options will vary between them. Hector Style and Hector Sharp EX will get the 6-speed manual transmission, while Hector Shine & Hector Plus Sharp EX (6-seater) will get the CVT system.

Interior Features of the New CR-V 2022

The new CR-V will get the interiors similar to the 11th generation Honda Civic. A 7.0-inch full-digital instrument cluster comes as standard. An option of either a 7.0-inch or a 9.0-inch infotainment screen above a minimalist dashboard is also offered. AC vents with a honeycomb effect, physical knobs and buttons to control the air-conditioning and much more.

Interior Features of the New Hector EX Plus

The Hector models is expected to get a 3.5-inch multi-information display, fabric seats, synthetic leather door armrest and IP insert, manual-auto AC, front and rear reading lights, tilt adjustable steering, rear AC vents and a cooled glove box. The full set of features will be unveiled by MG in the coming months.

Honda’s new CR-V is highly anticipated in India and we can hope they launch it here. The older CR-V and Civic were discontinued after the BS-6 norms came into effect. But, since the new CR-V can cope with the standards, we can sure hope to see them launched here. The price of the SUV will be competitive as it has to rival with the likes of Volkswagen Tiguan and the upcoming Hyundai Tucson.

The Hector on the other hand, has been made cheaper in their lower variants. The whole features missing out in the variants is part of the company’s efforts to make the SUV cheaper and more affordable by the middle-class market. This could bring down its price from around the original Hector’s price of ₹14 lakhs. We can expect more details regarding the same in the coming days.

So, what’s your choice going to be? Our suggestion is that, if you need a classy SUV for your fleet, you could go with a fully loaded CR-V. On the other hand, if you need multiple choices for features, we suggest you select one from the Hector fleet. If you are looking for a good quality 7 seater, then Hector EX Plus is definitely a choice that won’t disappoint you.