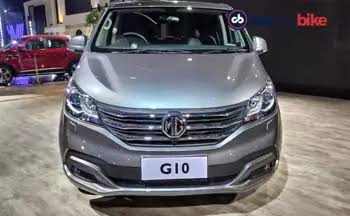 MG Motors revealed the range of cars at the Auto Expo 2020. It made a significant impact among the people in Auto Expo and grabbed the attention of dozens of people in the event with its incredible cars. The company has also revealed the bigger version of the MG Hector and 7 and a seven-seater which is Gloster. MG is planning to expand its network in India in next 2 years with its all-new models. Let’s take a look at the four cars that MG is going to launch in India in the coming 2 years.

It’s a seven-seater SUV which was also showcased in the Auto Expo 2020. The SUV will lock horns against the Ford Endeavour and Toyota Fortuner. We can expect the launch of the car in India in somewhere around Diwali. Talking about its engine it will come up with 2.0 liter turbo engine of diesel.

MG G10 is a luxury MPV that was also showcased in the Auto Expo 2020. The car will be positioned against KIA Carnival which was launched recently. We can expect the launch of this car in early 2021.

It’s an affordable MPV just like the Maruti Suzuki Ertiga. Powering the car, it will offer 1.5 liter engine of petrol that is capable enough to produce 103 PS and the peak torque of 135 NM.