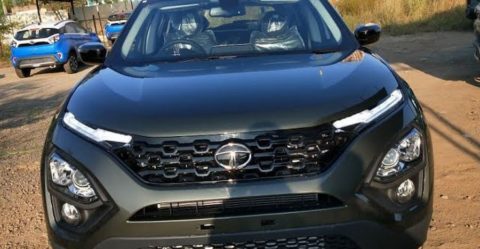 Tata Motors is soon going to launch special edition Tiago, Altroz, Gravitas, and Harrier. The new models have been given the name of the Camo and Dark editions. All of these new editions will be launched around the festive season this year. Just before the launch, the Tata Harrier Camo edition was spotted in CAMO green colour.

According to the leaked information, the special edition Tata Harrier Camo will be available in 6 different variations – XT, XZ, XZA, XT+, XZ+, and XZA+. If we look at the Tata Harrier Camo edition, you will realize that it looks quite similar to the regular one.

Speculations are also doing the rounds that Tata Motors will bring in two new SUVs – HBX and Gravitas. They will arrive in the Indian market at the beginning of the next year. Gravitas is basically a bit bigger than the Harrier. Tata Gravitas will hit the road earlier than the Harrier. There will be two seating layouts, 6-seater and 7-seater. It will get the majority of the design elements from Harrier. However, you can expect some design elements and features in the interior and exterior as well that will make the model a premium offering.

Coming to the engine and transmissions, as we said earlier, this too will get borrowed from the Harrier. The Gravitas will come equipped with a 2.0 L, 4-cylinder diesel engine. The engine will be capable of producing 168bhp power and 350Nm torque. With this, you will get the option of both 6-speed and 6-speed torque converter automatic gearboxes. Tata Timero, the Tata HBX-based mini SUV, will lock horns with the Maruti Suzuki S-Presso. As per the speculations, the model will come equipped with a turbo and naturally aspirated version of the 1.2 litre, turbo petrol engine.

For more updates, come back soon. We will keep you posted with the latest events in the automobile world.