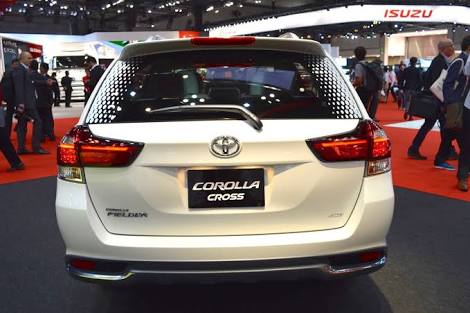 Toyota has set its mark in the Indian market and is planning to expand its SUV market. They are known for best in class comfort and maintenance. In this era of crossover vehicles between different segments, they are coming up with their mini SUV a 4.4-meter car based on their leading sedan model Toyota Corolla Altis.

Their new crossover Toyota Corolla Cross has been seen testing on Indian roads and will be launched in July. It is based on the TNGA platform and priced between the new Toyota Yaris Cross and the RAV4 SUV. It will get its power from the 1.8-litre and 2.0-litre petrol hybrid engines sporting a thick chrome grille. It has sharp looks with sleek LED lights blending into the front of the vehicle giving it more aerodynamical looks.

At the back a chrome strip of LED lights running across the tailgate and sides giving it an aggressive look. With the dual exhaust pipes and the shark fin rendered in the leaks coupled with the dual-tome bumper at the back, the car uses a bold new strategy to appeal to the customers.

The engine can produce engine producing about 170 PS power and 200 Nm torque and will be a 6-speed manual and have an optional model of CVT automatic transmission. It is expected to have 17-inch alloy wheels; however, while the top-model will have 18-inch wheels.

It will have the latest and greatest features with the best in class comfort offered by Toyota. Toyota has a lot to offer in this new era of crossovers. Still, the influence of Corolla Altis should not be understated, Corolla Altis was the company’s highest-selling sedan and hopes this SUV will follow in its footsteps.

The Toyota Corolla Cross will rival the likes of Honda HR-V, Jeep Compass which will receive their new upgrades soon. Honda’s HR-V will also be upgraded in length, reaching 4.4 meters which are turning out to be a new trend.